Jon and Evelyn Bean were introduced to a non-denominational Bible Study teaching biblical financial principles over 25 years ago. Jon had tried to start a business, which was a complete failure! After 5 years we lost over $250,000. All of our IRAs and short-term savings were spent to make up for lost income. When the money ran out we turned to our credit cards – and ran up about $35,000 in credit card debt, in addition to having two car loans and a home mortgage. We did everything wrong and made all the financial mistakes that could be made! 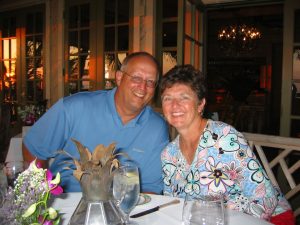 We were struggling with our finances and that led to great tension within our marriage. However, as we studied the Bible, we could see that if we faithfully followed what we learned, we might be able to repair our finances and strengthen our marriage at the same time. Which we did! Twenty years after that first study we were able to retire from paid jobs and become volunteers to serve God full time in the unique way he called us.

Learning and applying the biblical financial principles had a powerful impact on both our financial and spiritual lives, and we felt called to take this message to Catholic Parishes. We discussed our desire with Howard Dayton who authored the original non-denominational study, and he graciously allowed us to create a Catholic version of the study, and Compass Catholic Ministries is the result.

We are blessed to serve in a ministry, which has such far-reaching value to so many people. We are passionate about our faith and our responsibility for spreading the word of God.

A Message From Evelyn

Taking two people who were in financial turmoil and having them serve in a financial ministry just proves God has a sense of humor. I am a cradle Catholic and was raised to have a much different attitude about money and possessions than Jon. My family was very frugal and my parents bought everything with cash, which meant there were many things we did not have. I never lacked the basics, but we were never able to afford what some of our friends had.

After we were married, Jon’s way seemed like a lot more fun than the way I was raised. Who doesn’t desire to have everything they want? Unfortunately that way led to a mortgage, two car loans and $35,000 in credit card debt. Which was really NOT a lot of fun. When we took that first Bible study, I knew that we had to change our financial habits, get back to core values and repair all the damage we’d done to our finances and to our marriage. It is often said that the best way to learn something is to teach it, and although facilitating the Compass studies is really not teaching, it is a way to stay focused on the message. By facilitating the Bible study we were able to stay focused on God’s word, and repair the financial mess we had created. And discussing our finances wrapped in God’s word helped to get over our differences and find common ground in our goals and future plans We are so blessed to have learned the Biblical financial principles together so we could use our mistakes, challenges and successes to help others.

A Message From Jon

I was pretty depressed in that first Bible study. Because of trying to start a business, we had lost a lot of money, created a pile of debt and our lifestyle had gone from comfortable to very uncomfortable—we were just squeaking by each month. At some point in the first several weeks of the study, the light bulb finally went on in my head. I didn’t really have a financial issue—my primary issue was a spiritual issue. God wasn’t number one in my life; money was number one!

I thought that I was in control. I worked hard; I earned my money; I deserved everything that I had. In truth, that last statement hit the nail right on the head. I did deserve all the financial issues that I had because I thought I was in control, not God. I worked hard, true, but I was using the skills that God had blessed me with. None of my skills and talents were my own doing. I began to understand that through my fault, I had failed. Maybe if I put God back as number one in my life, he could, through his graciousness and his love, show me the way.

Now, several decades later, that was the best decision that I ever made! I put my faith in God, trusted in him and what he taught in the Bible and we were able to recover from all the mistakes that I made, create a spending plan that allowed us to payoff debt and save like we had never saved before. We saved enough to be able to work for God without having to worry about earning a salary. He has provided for us and now we hope to be able to share what we learned with you. We are living proof that his way is the best way! Test