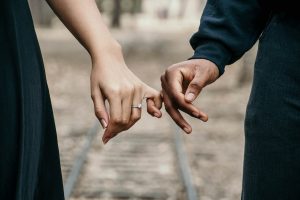 When couples say their vows at the altar, they don’t promise to be completely open and honest about all their financial information from this day forward.

If the husband and wife aren’t honest with each other about their entire financial situation, it can lead to big problems in a marriage.

If money isn’t an open topic that is easily discussed, money challenges can become a way of life. A secret bank or credit card account; spending $500 or more on a purchase without telling their spouse; missing cash in the bank accounts and hiding expensive purchases all break down the trust required for a strong marriage.

Differences about money can put a divide between husband and wife. When spouses don’t share financial information with each other it can often lead to divorce.

Our culture pushes us toward thinking that money is the most important aspect of our life and will ultimately make us happy and fulfilled. This leads us to think finances are an individual matter and it is OK for a married couple to keep their finances separate.

Advertisers manipulate us with their consistent messages about what we have to buy in order to happy and successful. Their focus isn’t about the product meeting our needs. Rather the focus is on sex, wealth, power and prestige. The ads encourage us to buy what we deserve, rather than what we need or can afford.

Our culture also encourages debt, which cripples the family finances. Over half of U.S. adult population has at least two credit cards and 14% have more than 10 credit cards. The average consumer has 13 debt obligations on record at the credit bureau (credit cards, mortgage, student loans, car loans, lines of credit, etc.)

Lack of communication in marriages can be troublesome, especially if the topic is about money (or lack of money). Money is a taboo subject in many families as talking about money makes people uncomfortable. Many couples don’t want to talk about money because they are afraid of the conflict that might develop. It is easier to keep spending and ignore the looming problem.

A lot of times these couples simply don’t know HOW to talk about money or what to do to dig out of their financial mess. But not talking about money in an open positive manner will definitely create conflict!

Bishop Robert McElroy of San Diego recently said: “The Church must always be enmeshed in the real lives and sufferings and challenges and joys of the people of God and the whole of humanity.”

The Church can go a long way in helping couples build a stronger marriage by giving them easy ways to talk about money. But when does the Church actually teach/talk about money? For most Catholics, the only time they hear about money in church is when there is a need for fundraisings, such as enhanced offertory, capital campaigns or missions.

Even the marriage preparation programs cover finances at a high level with almost no tactical detail. They do mention the importance of using a budget or avoiding debt. But do they talk about sharing credit reports and credit scores or how much each spouse can spend without a conversation, or lifestyle limits (how much is enough)?

Sharing dreams and goals and plans in any area of a marriage makes the couple much stronger and builds bonds between husband and wife. People who say they have a “great” marriage discuss their money dreams with their spouse. But beyond dreams, couples who talk about money on a regular basis are happier in their relationships than those who discuss finances less frequently.

Many priests don’t talk about personal money matters because they don’t think about it, don’t think it’s their role or they lack skills to do it. They don’t see the correlation between faith and finances. But aren’t we supposed to live our faith in every area of our life?

Unfortunately, most married couples learn about finances through Trial & Terror, which mean years of conflict and pain and arguing about money.

As a church, we need to teach people that their faith and their finances go hand in hand towards having a stronger marriage.

We have resources to help couples talk about money wrapped in the word of God:

Navigating Your Finances God’s Way is a 9-week small group Bible study; Set Your House in Order is a 5-week small group study and God Marriage & Money is a resource to help couples who are engaged to be married have the money talk before money becomes a problem.  Contact us for more information.

Listen to our podcast.