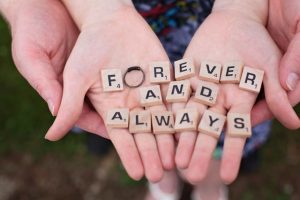 When a couple gets married they each bring assumptions and preconceived notions about money into their marriage. He thinks $1,000 in debt is horrible. She thinks $10,000 in debt is normal. He wants to lease a car and get a new one every 2 years.  She assumes they’ll buy a good used car and drive it till the wheels fall off. He thinks they will only use cash and buy what they can afford. She thinks they can use credit cards and buy whatever they want. He wants to fly by the seat of his pants financially. She thinks they need a formal written budget.

Without planning and a sense of direction, discussions about money can lead to arguments and finger pointing–definitely not a good communication method! Communication about anything makes that topic a shared concern between the spouses, and money falls into this category

Having a date and talking about money may not be considered a romantic thing to do when you are engaged to be married. But, not talking about money may lead to divorce, which is definitely not romantic! Joint discussions about the family finances need to happen early and often in order to build and maintain a strong healthy marriage.

Financial discussions should take place in an honest and open way without playing the blame game. One of the reasons we encourage couples to develop a spending plan is to take away the emotion and help them focus on facts. Instead of saying “you always overspend,” the conversation can be much more non-threatening, such as “Our entertainment budget is over the limit let’s talk about what happened.”

Having a spending plan helps you and your fiancé focus on the overall vision and plan for your money and once you do that, the small day to day decisions take care of themselves. It’s about making a plan, and sticking to it together by encouraging each other.

The day to day spending should be reviewed weekly. The budget needs to be reviewed monthly (or more often if you are just starting out.) Long term financial goals such as buying a house, saving for retirement, replacing a vehicle or a large scale home improvement projects should be reviewed every 3-12 months.

A sure way to derail your marriage is to involve your parents in your finances, either by asking for loans or because mom and dad keep funding your lifestyle. When you marry, you are to leave your parents in order to become financially and emotionally independent from them.

It is dangerous to a marriage if the couple is financially dependent on mom and dad, because that dependency gives mom and dad every right to judge how, when, where and on what you spend money. A young married couple needs to learn how to work together as a team without the involvement of either set of parents.

Many financial experts promote the use of separate bank accounts–yours, mine and ours–but that can be dangerous to a marriage as it builds walls between the spouses. Jesus said, “A man shall leave his father and mother and be joined to his wife, and the two shall become one flesh” (Matthew 19:5).  In order to become “one flesh,” the money must be considered ‘ours’ or there will be arguments and accusations.

The money in a marriage and all the responsibilities that come with money need to be shared by both spouses–no matter which one works or who makes more money. Find ways for you both to be equally engaged in all money decisions.

Whether you like it or not, how you communicate about money and how you handle money as a couple has a huge impact on your marriage

Listen to the Compass Catholic Podcast for more on this topic.