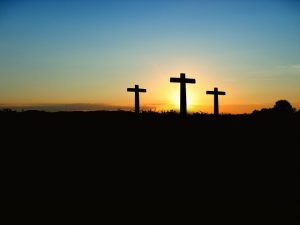 The Gospel reading yesterday always confused me, until I really concentrated on the details. Luke 16:1-13 tells the story of “The Dishonest Steward.” To summarize, a steward was fired because he had squandered the rich man’s property. He was left without a job and did not want to do manual labor, nor did he want to beg. But he needed a way to make a living. Finally, he decided to go to each of his master’s debtors and forgive a portion of their debt. And the master commended that dishonest steward for acting prudently.

The praise for a dishonest steward has always bothered me. Why is he being praised for being dishonest? In understanding this passage, it helps to remember that at this time in history, agents acted on behalf of their master. The steward was praised because he collected the full amount of the debt owed to his master. The debt that was reduced or eliminated was actually his commission. So even though he was guilty of squandering the rich man’s property, he was honest in collecting the master’s debt payments.

He was also praised for being prudent. By eliminating his commission, he charged the debtors less and made friends with them. Thus they became obligated to him. Instead of being a victim of circumstance, he turns a bad situation around to benefit himself by making friends with the debtors. The parable does not praise dishonesty, rather it praises the ability to use our material resources wisely in a time of crisis. The steward knew he needed friends more than he needed the commission money.

This same parable of The Dishonest Steward gives us the passage where Jesus mentions two kinds of wealth—dishonest wealth and true wealth. “If, therefore, you are not trustworthy with dishonest wealth, who will trust you with true wealth?”

In some Bible translations the word mammon is used instead of the phrase “dishonest wealth.” The root word in Greek is mammonas, which translates to “money, wealth, and material possessions.” In ancient times, the word mammon had a negative connotation, as it was used to describe gluttony, greed, and dishonest worldly gain. Ultimately, mammon described excessive materialism, which seems to continue to be a problem today.

Money, worldly riches, or wealth are not bad in and of themselves. These things are simply tools for us to use in our secular society in order to buy things we need (and maybe some items we want.) What becomes bad is when money becomes the driving force in our lives and takes on a level of importance it does not deserve. Money can be used to build churches and hospitals or to care for the poor and needy. It can also be used to for illicit purposes which destroy people’s lives.

The true riches in this gospel passage have nothing to do with money and everything to do with spiritual blessings, such as the seven fruits of the Holy Spirit: love, joy, peace, forbearance, kindness, goodness, faithfulness, gentleness and self-control, and most importantly a relationship with God. These true riches can not be bought with any amount of money, no matter how wealthy you are.

Another meaningful passage in this parable is: “You cannot serve both God and mammon.”

It is not about the amount of money we have. It is about how faithful we are with whatever amount we have been gives whether much or little. Look at someone’s bank account and you will see what is important to them – what they idolize.

Jesus calls us to have complete dependence on the Father, not on our own economic security. All the money and possessions we have here on earth ultimately belong to God and are to be used for his purposes.

This world is temporary, yet millions of people live their lives as if this world is all there will ever be. They devote their entire lives to getting ahead in this world and accumulating all the “stuff” that seems so important, but which is, in reality, useless.

If the reason you are living is to make money for the sake of the things money can buy, then money becomes your god, and you cannot serve the living and true God. The verse says we CAN NOT serve God and Money. To be dependent upon wealth is opposed to the teachings of Jesus who counseled complete dependence on the Father as one of the characteristics of the Christian disciple

Everything we have can be used as either an material idol to worship or a tool to spread God’s Kingdom here on earth.