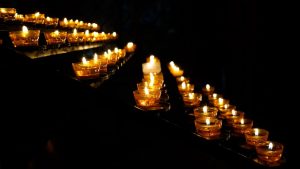 Fifty or sixty years ago, if you had asked someone if they were honest or truthful, they would have looked at you as if you had two heads. At that time, there was no discernable difference between the two. Our attitudes have changed so much that today people often manipulate their words and actions so they are scrupulously truthful without being absolutely honest. Unfortunately, the act of being totally truthful without being absolutely honest is acceptable in our secular society.

A great example of this is the little boy who was playing soccer in the house. He kicked the ball and it crashed into a lamp. The lamp fell to the floor and broke into a million pieces. Mom rushed into the room and asked the little boy if he had broken the lamp. He looked at her innocently and said “No Mommy.” When questioned further, he admitted that HE did not break the lamp. The BALL broke the lamp. He was technically honest, without being entirely truthful!

Judges 17:6 reads, “In those days there was no King in Israel; everyone did what was right in their own eyes.” When we act in ways acceptable to the secular world, but unacceptable in our spiritual lives, we are acting as if our living Lord, Jesus Christ, is incapable of discovering our dishonesty.

It is human nature to try and avoid the feelings of discomfort, yet acting dishonestly is never an acceptable way to make ourselves feel better. When we act dishonestly, we take matters into our own hands and control situations to our own benefit.

By manipulating our actions and words to be totally truthful without being honest, or by telling “little white lies” to avoid conflict, we are just as displeasing to God as the Pharisees. Society’s acceptance of relative honesty is the opposite of what we learn in Scripture. The Lord requires absolute honesty from all of us at all times in every aspect of our life.

Think about the difference in attitudes related to honesty that exist in our secular society and in God’s eyes. Society says our decisions about being honest can be based on whether or not we will be caught, yet if we are making a godly decision, we must base all our decisions on whether or not they will please God.
All of us make many small decisions about being honest every day. Do you deal honestly in all areas of your life, even the smallest ones? Do you quietly smile and pocket the extra money if the cashier makes a mistake when giving you change? Have you ever sold something and not been entirely truthful because you may have lost the sale? Do you cheat on your taxes—even just a little? Do you bring supplies home from the office for personal use?

When we act dishonestly we are deceiving another person. We may fool ourselves into thinking it’s just a business, or the government, or an insurance company. We may talk ourselves into thinking we are just trying to avoid conflict, but the victim is always a person and ultimately it is the business owners, the other consumers, or the taxpayers, or your spouse, friend or family you are hurting. In these situations, we are directly harming one of God’s children.

Our actions speak louder than our words and acting dishonestly dims the light of Christ shining within us, erodes our faith response, and tarnishes the Christian life that others see in us.

Little white lies are easy to tell, but each one leaves a small chip in the foundation of your relationship with others, and too many small chips will result in a cracked foundation.

The Catechism teaches, “By its very nature, lying is to be condemned. It is a profanation of speech, whereas the purpose of speech is to communicate known truth to others. The deliberate intention of leading a neighbor into error by saying things contrary to the truth constitutes a failure in justice and charity.” (Catechism of the Catholic Church 2485)

And the Bible tells us: “Scoundrels, villains, are they who deal in crooked talk.” (Proverbs 6:12) and “Lying lips are an abomination to the Lord, but those who are truthful, his delight.” (Proverbs 12:22)
If you have been dishonest in any way, seek the Sacrament of Reconciliation for a fresh start.