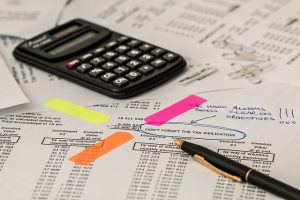 Last week we blogged about getting organized so tax time is less stressful and more automated. This week’s blog is about another aspect of tax time – cheating!

Most of us don’t enjoy paying taxes and many of us object to the way our tax money is being used. Some people even go so far as to insist that taxes are unconstitutional. For example, some people argue that income taxes violate the First Amendment rights to freedom of speech and freedom of religion. (Not sure I see how that relates to paying taxes.)

Others say income taxes violate the Fifth Amendment statement that no person shall be “deprived of life, liberty, or property, without due process of law.” I can see where some people may be able to make a case that taxes deprive us of our “property” (i.e. money) if they totally ignore what we get in return for our tax dollars.

Still other tax protesters have argued that income taxes impose involuntary servitude in violation of the Thirteenth Amendment or that the Sixteenth Amendment (Congress shall have power to lay and collect taxes on incomes, from whatever source derived, without apportionment among the several states, and without regard to any census or enumeration) was never ratified.

All these arguments have been rejected by the courts and according to the government, we are obligated to pay our taxes. The Bible even reiterates that we are obligated to pay taxes. Romans 13:6-7 says: “This is why you also pay taxes, for the authorities are ministers of God, devoting themselves to this very thing. Pay to all their dues, taxes to whom taxes are due, toll to whom toll is due, respect to whom respect is due, honor to whom honor is due.”

It may be difficult to see that the authorities in our government are “ministers of God.” And we may disagree with any and all decisions of our local, state or federal government, but we are still obligated to pay taxes.

The IRS released a Taxpayer Attitude Survey from 2014 which indicated that a majority of the responders found in unacceptable to cheat on their taxes. I wonder if people were saying they were honest because they were speaking face to face with a person, or if there are really so many people who are actually honest. Only 11 percent were tolerant of cheating “a little here and there” or “as much as possible.”

The cheaters lie in various ways – they write off items which are not considered valid tax deductions or they under report their income, and this is especially true of people who receive a large portion of their income in cash (restaurant servers) as well as the individuals who specifically deal in cash transactions in their business to hide income.

People who cheat may think they are in some way “getting even” with the government, but they are really hurting the other taxpayers. The victim in any dishonest situation is always a person – a child of God. Our faith calls us to be honest in all situations. Job 31:6 tells us: “Let me be weighed in a just balance, and let God know my integrity!

A variety of systems and situations in society rely on our honesty and integrity. For instance, on Halloween children know they are supposed to take only one piece of candy from the bowl full of treats. As we grow into adults, we’re trusted to act with integrity in many situations, and some people do so because they are afraid of the consequences associated with getting caught, while others do so because they are following the Word of God.

This isn’t to say that you can’t maximize any and all legal deductions to which you are entitled. With the average refund being more than $2,902 (as of the 2014 tax year), there is a lot of financial gain to be had. But maximizing legal deductions and cheating on your taxes are two entirely different things and cheating is never acceptable.

Mark 12:14-17 reads: “They came and said to him, ‘Teacher, we know that you are a truthful man and that you are not concerned with anyone’s opinion. You do not regard a person’s status but teach the way of God in accordance with the truth. Is it lawful to pay the census tax to Caesar or not? Should we pay or should we not pay?’ Knowing their hypocrisy he said to them, ‘Why are you testing me? Bring me a denarius to look at.’ They brought one to him and he said to them, ‘Whose image and inscription is this?’ They replied to him, ‘Caesar’s.’ So Jesus said to them, ‘Repay to Caesar what belongs to Caesar and to God what belongs to God.’

If we are living our faith, Scripture clearly tells us that we are required to pay taxes and it is not acceptable to cheat on our taxes (or anything else for that matter!)