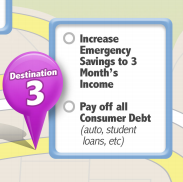 After you have completed Destination Two on the Money Map, it’s time to celebrate!  Go to the movies and get dessert afterwards.  Have a make-your-own-sundae party for the family. Do a picnic in the park.  Whatever you do, celebrate your achievements (and stay within your budget)!

In Destination Two, you increased your emergency fund to one month’s income.  Now that you have a solid spending plan in place, have been tithing regularly to church and charitable organizations, and have credit cards out of the way, it is time to increase the Emergency Fund.  In Destination Three, you are going to increase the emergency fund to three month’s income.

Saving this amount of money will require discipline because I have found that a lot of families will relax a little once the doom and gloom of credit card debt is no longer hanging over their heads.  Also, having one month’s worth of income put away for emergencies does feel good and provides greater security against future indebtedness.  However, it is imperative at Destination Three to continue setting money aside for emergencies by increasing the emergency fund to three month’s income.

When people look at keeping this larger amount of money in reserve they often ask whether or not it should be invested.  Usually having somewhere between $1,000-$5,000 in a liquid account such as a savings account or money market makes sense and there is typically a small amount of interest being paid which is a nice bonus.

Once the amounts start to grow, setting aside three month’s worth of salary and keeping it liquid might make us a little uncomfortable if we think about the interest we could be missing by leaving the money in such a conservative account.  Investments are a great tool for helping our money work for us, especially as we look to grow our safety net to three month’s worth of salary.  However, if the time comes when we need immediate access to that emergency money and it is tied up in an investment that is not performing well, we may have to sell it off, potentially incurring a loss.  While selling off investments to access emergency money is better than paying interest on a credit card, the temptation is to use the credit card and wait to sell the investment after it bounces back and regains its value. That puts you back to having credit card debt which defeats the point of creating this nice padding of emergency money.

While many investors might discourage having large sums of money set aside in a savings account or money market that have conservative returns, I would argue that it is better to have that money available when you need it rather than incur a loss if you need to tap into it at an unfavorable time.  In my opinion, any amount under $15,000 would be sufficient to park in a money market account.  Once you start to exceed that amount, you may want to look at outside investments such as mutual funds to diversify your savings and put your money to work for you.

The second stop in Destination Three is paying off other consumer debts such as automobile loans, student loans, and medical/dental bills.  Consumer debt is anything other than credit cards, the mortgage and business loans. Implement the Debt Snowball on your consumer debt the same way you did the snowball on your credit card debt by tackling the smallest debt first and putting all extra money toward the smallest debt.

Car debt can be one of the biggest obstacles in paying off consumer debt because many people never get out of it. When they are ready to pay off a car loan, they buy a new car, and continue the debt cycle.  Unlike a home, which usually appreciates in value, a car depreciates in value as soon as you drive it off the lot.  The way to escape from auto loan debt is to keep your car at least three years after it is paid off.  Continue making the car payments, but pay it to your own savings account in order to save for a replacement car.  Then when you are ready to replace your existing vehicle, buy a good used car. The money you have saved plus the trade in on your existing car should allow you to pay for the used car.

What a great feeling it will be to check Destination Three off the Money Map!

“Owe nothing to anyone except to love one another; for the one who loves another has fulfilled the law.” ~Romans 13:8