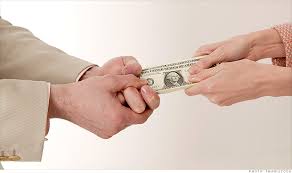 In their marriage vows, couples promise to love each other for better or worse, for richer or poorer, in sickness and in health. Everybody likes the better, richer and health part of the vows. The worse, poorer and sickness part of the vows can be a real challenge, especially when those challenges come from the couple lying to each other about their finances.

There was a husband who invested a significant portion of their savings in an expensive piece of property with his ex-girlfriend and did not tell his wife. A wife was forced to leave her job due to illness, and used credit card cash advances to maintain the family spending level. Another couple maintained separate accounts and had split the family finances so each paid “their fair share” with no accountability to each other. Then the husband’s fair share had a hard hit due to several unexpected household bills and a dental emergency. When we met with them, the wife told him that his dental bills were not her problem. Then it hit her like a ton of bricks – she ran right smack dab into the worse, poorer and sickness part of those vows. His dental bills were her problem precisely because of those marriage vows.

The way a couple deals with money reveals a lot about their relationship and their marriage. If one person controls all the money they are dealing from a position of power, especially if they restrict their spouse’s spending. It is important that each person in a marriage has input into how the money is allocated for the regular expenses. It is equally important that each has some “mad money” that they can use as they wish. And that is not a bad idea. What is a bad idea is lying to your spouse about any type of spending and hiding your finances from them.

Couples need to have open and honest discussions about finances—both before they get married and ever after. Finances can be an ongoing source of conflict in a marriage and one of the best ways to solve the conflict is to develop a process that you both agree to. This is important whether one of you is a stay at home parent or both of you are employed, and no matter who has the higher salary.

If the same thing happened in a business it would be called embezzlement!

(The Compass Catholic Navigating Your Finances God’s Way Bible study provides an authentic Catholic approach to finances and 70% of the married couples who took the Bible study together report that their marriages were strengthened by the study.)